This lovely book book is another result of the shake up and break up at AT&T that was in the late 70s and early 80s. It really was a bizarre time in telecommunications. My mother is still mad at the phone company for making her “buy” a phone.

END_OF_DOCUMENT_TOKEN_TO_BE_REPLACED

In the old days, the phone were the “property” of Ma Bell (aka the phone giant AT&T). After lengthy anti trust case, AT&T was split into the “baby bells” and phone service changed for most consumers. People had to buy or rent phones and arrange for installation. Cellular phones were still not common until the late 1980s, and they were expensive. This would have been a good purchase for a public library back in the day, but I doubt would get much action these days. It’s an obvious weed, so I will add a link to Lily Tomlin’s Ernestine that originated on Rowan and Martin’s Laugh-In. (An awesome show.) This clip is when Ernestine calls General Motors.

END_OF_DOCUMENT_TOKEN_TO_BE_REPLACED

Think of a customer service course you are being forced to attend. This is that workbook. It reminds me of something that would be mandated so someone can check off a box on a form. Of course one should use courtesy answering customer calls. They should also be mindful of word choice. However, some seriously big gaps exist in this training:

END_OF_DOCUMENT_TOKEN_TO_BE_REPLACED

In 1974, the government filed an anti-trust suit against AT&T and by the early 1980s, the phone company was broken down into the “Baby Bells”. New competitors came on the scene and were offering long distance options for consumers. (Personal aside: my father often remarked that the only people that came out ahead in the breakup of AT&T were the lawyers that billed obscene amounts for the Bell reorganization.)

In the 1980s, this would have been an excellent choice for a public library. In 2020, this book is ridiculous unless you are putting together a telecommunications history archive. I actually couldn’t believe it was sitting on a shelf in a public library.

END_OF_DOCUMENT_TOKEN_TO_BE_REPLACED

This book is all about telemarketing to increase your business success. Evidently, this guy must have one of the people that started us on the path to robo calling and all sorts of other awful phone technologies. Given the topic, my first instinct is to pull the book, set in on fire, and then grind the ashes into the ground. Excuse my personal tantrum on the evils of telephone abuse that have been heaped upon me since I was old enough to hold a phone.

END_OF_DOCUMENT_TOKEN_TO_BE_REPLACED

900 phone numbers were quite the thing in the 1980s and 1990s. Every minute on these lines cost the caller upwards of several dollars a minute. These numbers were mostly known for phone sex or psychic hotlines. If you are of a certain age, you will probably remember Dionne Warwick’s Psychic Friends Network.

I nabbed this copy from a library and it looked absolutely untouched when I checked it out. I have no idea how good the content, but the book design is boring. Unfortunately, I don’t have any circ data but I feel pretty confident in guessing this book hasn’t seen much action.

END_OF_DOCUMENT_TOKEN_TO_BE_REPLACED 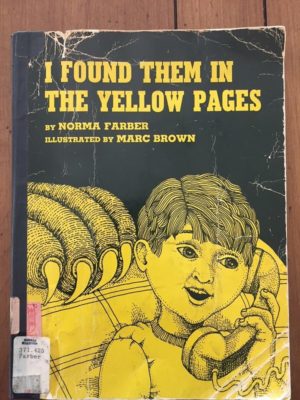 I Found Them in the Yellow Pages Farber 1973 Submitter: Why is this awful? First, yellow pages – does anyone under 45 know what they are? Second, only males have professional occupations. Third, the florist appears to be a predator.

END_OF_DOCUMENT_TOKEN_TO_BE_REPLACED

Eddycat Teaches Telephone Skills Barnett 1993 Here we have a lovely picture book from the early 1990s about how to use a telephone. I like the cute format, and much of the advice is still pretty good. However, children might