Between Parent and Teenager
Ginott
1969

Dr. Haim Ginott is considered to be an expert on parent child communications. Many of his theories are still in practice today. From a library perspective, this is an important book, particularly in libraries supporting research in parenting, child psychology, education, and other similar programs. Public libraries might have to think twice about retaining this book. Although important, the experience and culture is reflective of the late 1960s and early 1970s. Situations, language, and discussions of sexuality and gender, are reflective of that time and might not be a first choice for today’s parent.

To weed or not to weed, that is the question. (Apologies to the Bard.) This decision should probably be decided by circulation and space available. Smaller libraries might have to let this one go, but larger and deeper collections can probably retain.

END_OF_DOCUMENT_TOKEN_TO_BE_REPLACED This one caught my attention in my sweep through the catalog. Since it is a parenting book, I wondered if there was something still relevant to today’s parents. I figure since the kids in question are in their 20s and 30s is it worth hanging on to in a public library collection? In everyday practice I wouldn’t necessarily weed a parenting book just for “age” unless it was woefully out of date. (Check out our Parent/Teacher category for real offenders)

I only skimmed this book, but the majority is standard parenting advice found in a variety of books. I am not quite sure it brings anything new to the table in 2022. In real life, I would weed if the circulation was still decent or if I need the space.

I probably wouldn’t have noticed this book except for the Alien Baby on the cover.

END_OF_DOCUMENT_TOKEN_TO_BE_REPLACED

Submitter: This was an excellent choice for this public library, which is settled in a very Catholic neighborhood. But that was 40+ years ago and its days are over. Most of the financial advice and information is way out of date. Some of the terminology is no longer accurate. It may not be awful, but the subject is topical, and we need to keep these sections of our library up to date, something this book can no longer do.

Holly: Nice cover. Single parenting is a walk in the park! Or, apparently it was 40+ years ago.

END_OF_DOCUMENT_TOKEN_TO_BE_REPLACED 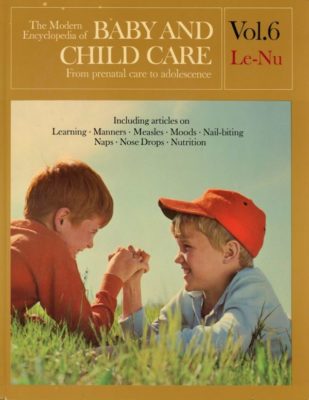 The Modern Encyclopedia of Baby and Child Care
From Prenatal Care to Adolescence
Vol. 6
Le-Nu
1966

Another find from my Swedish Death Cleaning project

I was in first grade or kindergarten when this was published, so I am pretty sure this wasn’t a book I picked up. I am guessing it was from my mother’s death cleaning and since she can’t abide waste, it probably ended up in a pile of stuff she gave me. For clarity, during my mother’s death cleaning she would shove random boxes of stuff into our hands any time she saw us in person. It was always a surprise.

END_OF_DOCUMENT_TOKEN_TO_BE_REPLACED

This book is all about combining those past theories of parenting into a new model. It seems as if there is always a “breakthrough” in how we parent. This is more an academic discussion. There is a grid outlining various parenting philosophies that I doubt non academics would find helpful. (I would be lying if I hadn’t thought about putting my kids in a Skinner box, just so everyone would be quiet.)

Parenting is just difficult no matter what. I read parenting books all through the 1990s when my kids were little. I am not sure that I had any particular moments of clarity or insight reading any of these books. The best advice is to keep trying and to keep reading, hoping one of these ideas or books will speak to your family.

END_OF_DOCUMENT_TOKEN_TO_BE_REPLACED

How can I understand my kids?
Bridging the generation gap
Wagemaker
1978

I have decided that one of the most popular subsets of parenting books is the understanding/I want to kill my teenager books. Parenting books are kind of a Hail Mary for surviving the drama of teens. Every generation goes through this. The themes are similar, kids don’t listen to parents and all their abundant advice/demands/standards. Kids complain that parents are basically clueless. Both sides are correct. Can this be solved with some scripture and this book? I doubt it.

Although a Christian themed book,  it wasn’t overly judgmental and it did put much of the burden of communication on the parents. The examples are interesting, but again assume white, upwardly mobile families with lots of resources and choices. How can they be real problems if you have resources and choices?

END_OF_DOCUMENT_TOKEN_TO_BE_REPLACED

In the world of nonfiction, many book titles fall under the category of “wishful thinking” or maybe “never going to happen”. Many books fall into this group: diet books, employee engagement, how to have an effective meeting, any get rich book, any books with the word “secret” in the title, cat training, cute maternity clothes, and last but not least, parenting. You will notice that many of these books are featured quite often on ALB.

END_OF_DOCUMENT_TOKEN_TO_BE_REPLACED

Even in the late 1970s, dads were not always allowed to be a part of the birth process. Consider this a sensitive man’s guide to sharing the pregnancy experience. Lots of feels for everyone. There is very little specific childcare or pregnancy advice. This is more about including the dads. Good choice for the late 1970s, but out of place in today’s culture.