Submitter: Turns out computer joke books age about as well as any other kind of computer book. The content starts before the title page, with a picture of a computer carved from a literal apple, though I’d be hard pressed to identify it as a carving of a computer if it wasn’t captioned. There’s a nice Red Scare Era joke on page one, and later on a joke about computers driving cars that reads a little differently now that computers are driving cars. Also a joke about humans turning computers on—is that supposed to be literal, or did we put innuendo jokes in books for children 40 years ago? Shockingly, this book circulated as recently as 2016, which is also about when I became responsible for this collection. Honestly, I’m a little embarrassed it took that long for this book to come to my attention.

END_OF_DOCUMENT_TOKEN_TO_BE_REPLACED 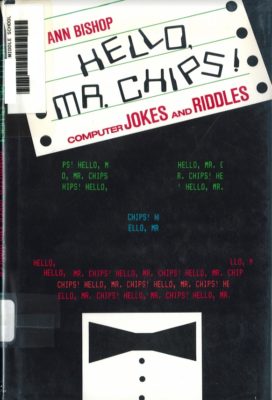 Submitter: I think this was probably a fantastic middle school book in 1982. What makes it awful now is that my students have never even heard of the terms that make up the punchlines. Also, the illustrations of computers with massive CPUs and pin-feed printers are unrecognizable to our students. My favorite joke requires knowledge of both old pop culture and obsolete technology: “What’s a computer’s favorite Ella Fitzgerald number? A-Diskette, A-Daskette.” I just read it to a group of 8th grade boys and received only blank stares.