76 Ways to Get Organized for Christmas
McCullough and Cooper
1982

This book is my kind of nightmare. These women probably start planning the Christmas on December 26. Obviously, from the introduction, you can already tell they have wayyy too much spirit. All that is missing is a Gantt chart and a Powerpoint. Since this book was published prior to many of those project management tools, I guess we can let it go. That alone makes this book a weeder.

END_OF_DOCUMENT_TOKEN_TO_BE_REPLACED

Just in time for your holiday cooking! All your special occasion dinners are here. Aside from the standard Thanksgiving and Christmas choices, we have those special foods for simple gatherings, like fancy sandwiches for the entire group. Again, the same loaf, cake-like sandwiches that have appeared on this site more than once or twice. God forbid you make a mistake and think you are biting into a loaf cake.

But wait, there’s more! Try a fruitcake for your next Christmas dinner. My late father was convinced there were only a handful of actual fruitcakes out there. Since no one likes it, it just gets re-gifted into eternity. I don’t think I have even seen a fruitcake since the early 1980s. I remember trying it as a kid because, cake, but nearly choking on the awful taste.

END_OF_DOCUMENT_TOKEN_TO_BE_REPLACED

As a mother (retired), I am totally okay with Mother’s day. (Actually, I am okay with anything that nets me a present or two.) This book gives us an overview of Mother’s day in the US and other countries. Not too bad, but somewhat boring. Then I got to the page about Mother’s Day in Yugoslavia, now Serbia. Evidently, Mom gets tied up by her kids. Really. Before you jump to any weird conclusions, I searched for some verification.

END_OF_DOCUMENT_TOKEN_TO_BE_REPLACED

The Big Book of Fabulous Fun-Filled Celebrations and Holiday Crafts Fobel and Boleach 1978 Some of these crafts must be seen to be believed. There is the shrimp and olive Christmas tree (3rd picture below). Nothing says birth of our

END_OF_DOCUMENT_TOKEN_TO_BE_REPLACED

Easter Eggs for Everyone Coskey 1973 Submitter: It’s more than you would ever want to know about decorating Easter eggs (including Egg Lore and Legends and Egg Customs), and it has some very non-PC text. Intro page is cleverly shaped

END_OF_DOCUMENT_TOKEN_TO_BE_REPLACED

It’s Time For Thanksgiving Sechrist and Woolsey 1957 As we start heading into November, I thought I would share this little holiday gem that had not left the shelf in at least 20 years. It might have been longer than

END_OF_DOCUMENT_TOKEN_TO_BE_REPLACED How To Make Christmas Ornaments Hendricks 1973 Submitter: Decorate your tree 70’s style! Found this gem in the oversized book section. We especially adored the earrings and the “Christmas Tree.” Holly: OMG, those earrings! Hiddeous. These ornaments look just like

END_OF_DOCUMENT_TOKEN_TO_BE_REPLACED 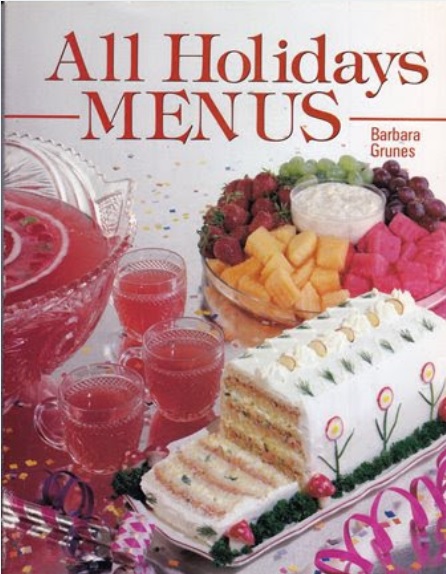 All Holidays Menus Grunes 1984 December holiday madness is in full swing. Those of you looking to expand your repertoire of holiday themed food will probably need this book. Of course there are menus for Thanksgiving or Halloween, but I