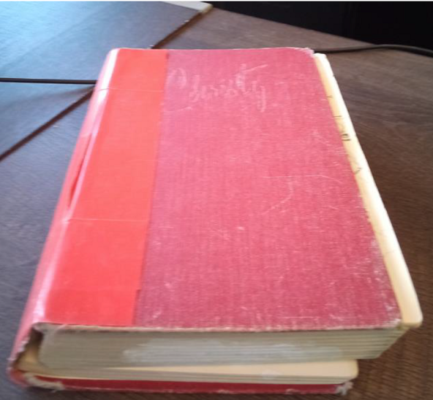 Submitter: While assisting a rural library with their weeding, we came across Christy. The solo librarian could not believe that it was still on the shelf. She was horrified. It was last checked out in 1995. This little library has done an excellent job of serving its citizens of 353. They use catalog cards and do everything manually, so it is hard to keep up! Someone must have thought that Christy could be brought back to life!

Holly: Poor Christy is being held together with about a pound of tape and a prayer – which is appropriate, since this book is popular with Christian homeschoolers in my community. My library’s copy has circulated 43 times since 2007 when our current copy was added, most recently one year ago today. It would even be worth buying a new copy if ours was in bad shape. Clearly it is not that popular in Submitter’s library, though, if they have a copy in this kind of condition that hasn’t gone out since 1995. I think they’re safe weeding it and letting it go. Different strokes for different folks! I am curious about the tape job, actually. You can no longer see any title from the spine and there’s no call number sticker either. Even the title on the cover is so faint you have to look closely to see what book it is. Maybe it would have circulated if anyone could tell what book it was while browsing.

END_OF_DOCUMENT_TOKEN_TO_BE_REPLACED 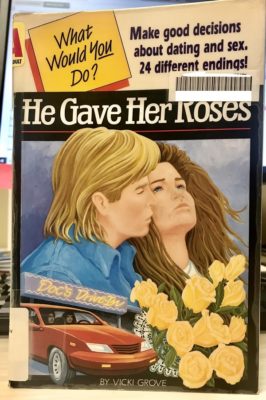 Submitter: This book is a “choose-your-own-ending” type of book about dating, but with a heavy religious theme, full of fear, shame, and judgement; and putting all the responsibility on the girl. In my opinion, it has no place in a public library to begin with, but it’s been sitting on my library’s YA shelves since 1990, even though it had not been checked out in over six years, and only a few times total. The cover art is horrendous, the girl looks like either a mannequin or corpse, and the story is even worse.

Stacey has her first serious boyfriend and is faced with deciding to have sex. In some of the paths, she ends up pregnant, and may have an abortion, give up the baby, or keep it. She may or may not marry the father, may or may not finish school. The ending that caught my eye was the one where she went to college and started dating a nice Christian boy, but then he dumps her when he finds out she’s not a virgin. But she doesn’t blame him, she just wonders if she will ever find anyone to love her. You know, now that she’s damaged goods and all. Just gross!

Holly: That’s a new one: Choose your own sex adventure.

END_OF_DOCUMENT_TOKEN_TO_BE_REPLACED 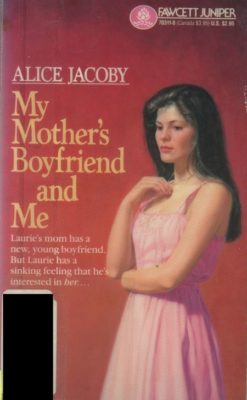 My Mother’s Boyfriend and Me
Jacoby
1987

This title gave me the creeps. Evidently Laurie’s mom (widowed when Laurie was a baby) went off the rails and starting dating a very cool dude named “Blue” (cuz of his eyes!). Two week after meeting this dude, Mom invites Blue to move in. Laurie notices that the guy is creeping on her and tries to tell Mom, but she defends Blue. Seriously, the guy’s nickname is Blue and he wears a gold chain and his shirt partially unbuttoned-even in the 1980s that was a creepy kind of look.

END_OF_DOCUMENT_TOKEN_TO_BE_REPLACED

This time we have a bit of a switch: the bodyguard is a woman! Chad, a local TV personality has been getting some disturbing mail from a fan. His police buddy sets him up with a female bodyguard, Jenna. This book has it all: romance, suspense, and a guy working through some issues about needing to be protected by a woman. Not that bad. It’s dated, but I am partial to the suspense angle in romance.

The reason I posted this today is that this 1994 paperback was held together with tape and prayer. I blacked out the handwritten “barcode” number.

END_OF_DOCUMENT_TOKEN_TO_BE_REPLACED Jill and Toni are besties and are ready to start adulting for real. Both of them plan to attend State U. Then Toni doesn’t get to go to college because of family problems and Jill gets a chance to get into that super first tier school called Rosemont. Everyone is having a difficult time. Jill gets a horrible roommate and Toni tells off the icky roommate when she visits Jill. Friendship troubles just blossom. Happily enough, they get their issues sorted and come to a new understanding. Growing up is difficult.

END_OF_DOCUMENT_TOKEN_TO_BE_REPLACED 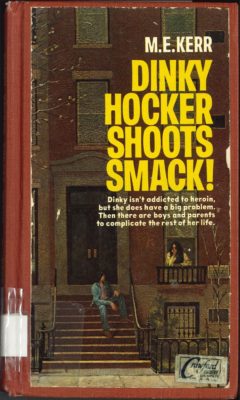 Submitter: This was . . . probably an OK book in 1972? And probably great in our context (small rural town in Michigan’s Upper Peninsula – about as far as it gets from Brooklyn.) I might take it home and read it. There’s a cat named Nader! The boy wants to be a librarian! It was adapted into an After-School Special! But it’s 2020. Our current YA patrons’ mothers are too young for this book. Also, it’s a mass market paperback in a library binding – the pages are brittle and falling out. It’s time to go.

END_OF_DOCUMENT_TOKEN_TO_BE_REPLACED 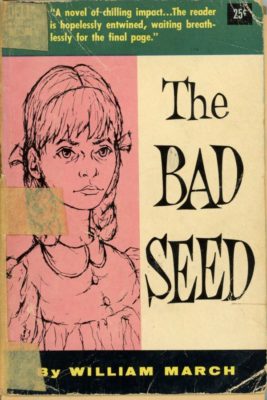 I have been doing well with this, although since I returned to work full time, I haven’t had as much time to keep going. However, I pulled out a box of stuff that my mother had given me and this book was in there. It is falling apart. Some of the pages crumbled as I opened the book. Definite weeder.

END_OF_DOCUMENT_TOKEN_TO_BE_REPLACED Submitter: This cover is… wow. I’m currently weeding my public library’s adult fiction collection. This particular book last checked out just five years ago in 2015, surprisingly enough. This appears to be a first edition from 1976, and the address stamped in the front of the book is from three library locations ago! The description on the dust jacket begins: “The De Cocos of Co-op City are a family of hard hats who think with their hands and kill with their love.” Judging by the Goodreads reviews, this was a pretty popular book at the time and was made into a movie. Dwindling circulation, a seriously dated cover, and poor condition mean it’s time for this classic to go. One of my co-workers described the cover as “A depressed Freddie Mercury-Sylvester Stallone amalgam is comforted by a younger Paul Dooley as Judd Hirsch looks on.”