The Cold War was turned up to 11 when this book was published, and this text reflects that tension. It is more of a middle school textbook than a country book like those common in public library youth nonfiction collections. (See our Spanning the Globe category for some examples.) I’m going to guess that this was probably a rogue donation, because textbooks aren’t a usual item in a public library collection. You will be happy to know that this was still in circulation as of this writing.

END_OF_DOCUMENT_TOKEN_TO_BE_REPLACED

Will the Soviet Union Survive Until 1984?
Amalrik
1981; revised and expanded edition

Having a date as part of the title automatically limits its shelf life. Even if the title just said “Will the Soviet Union Survive?” probably could have bought more time on a shelf. Having said that, these books do have a place in a university or archival collection. Public libraries, on the other hand, would probably be better retiring this and replacing with historical retrospectives.

END_OF_DOCUMENT_TOKEN_TO_BE_REPLACED 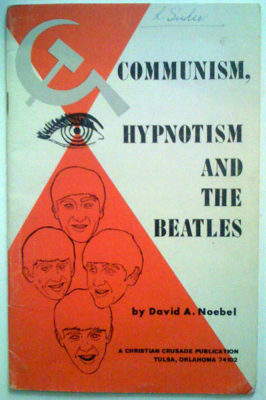 Communism, Hypnotism, and the Beatles Noebel 1965 I can understand this book being in certain university or special library collections, but public libraries? Hmmm… It doesn’t show on the book cover, but WorldCat shows a sub-title of: “an analysis of

END_OF_DOCUMENT_TOKEN_TO_BE_REPLACED 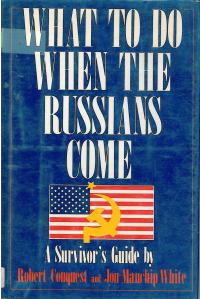 Completing our trifecta of red scare material,  here is a great book describing how you too can survive the occupation of the Soviets.  This particular book needs to be in an archive since it really does capture the hysteria of the cold war.  (Did you notice one of the author’s name?)  I wonder if these guys thought about a second edition after 1989?

END_OF_DOCUMENT_TOKEN_TO_BE_REPLACED

How the communists use religion
Bundy
1966

Okay comrades, this is yet another gem plucked from a small public library.  This poor book had definitely seen better days.  The cover was damaged and the book had a serious “odor”.  Contents not withstanding, I think we can do better in both preservation efforts and in providing current information.  In my cursory examination of this title, this book  suggests that the Soviets had a great deal of control or influence on the Church.  Anyone know the background of this title?

END_OF_DOCUMENT_TOKEN_TO_BE_REPLACED

You can trust the communists (to do exactly as they say!)
Schwarz
1960

Fellow library comrades: I know I will hear from everyone about how this is an important piece of culture and we should never weed this kind of material.  Heck, I am old enough to appreciate the communist threat.  (I even had to sign a loyalty oath in the early 80’s as part of my job! – Go America!)  This book has a place in an archive or a museum, not in a popular materials collection for a small public library.  I think I am safe in saying that by 1989 this book lacked some punch.  In case you really want to feel old, today’s college students were probably born after the Berlin Wall came down.