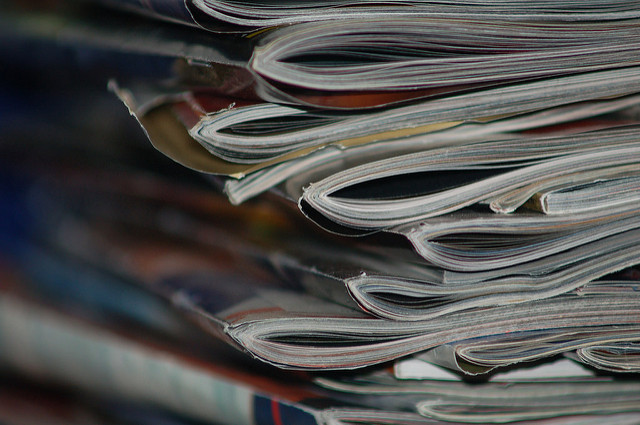 One of my library science student interns asked me to spend 20 minutes with her, going over with her how the serials collection is managed at our library. That is one of my collection responsibilities, so I was happy to comply. (Truth: after I jumped for joy that anyone wanted to chat about serials, I miiiight have kept her for a full hour.) Here’s how it works at our library:

Our main vendor for serials is EBSCO. We receive a huge annual renewal packet from them in June that lists every single magazine we subscribe to through them. Not all titles have the same renewal date, but I love that everything is renewed in one packet. EBSCO takes care of whether they are renewed in September, January, or whenever. I simply tell them which titles to renew (or not) and any titles we want to add as new subscriptions. Most titles can be cancelled any time throughout the year, so that renewal packet isn’t a last-chance deal. It’s just a really convenient way of handling renewals.

When that packet arrives (two-sided, and a hundred or so pages long), I look through every title on every page. Some are obvious – I know we will always renew super popular magazines like People, Newsweek, Time, etc. Some titles are less obvious, and I look them up in our ILS (Sirsi/Dynix Symphony) to see if any of the issues have been used. That’s not super obvious either, since magazines are a very browsable collection and don’t always get checked out. To make up for that, I regularly walk around the magazine area and collect titles left on tables, chairs, and random shelves and use the “mark item used” feature in the ILS. That doesn’t make up for all the browsing that happens in the magazine collection, but I do it regularly enough that it definitely helps give a better picture of which titles are being looked at. Condition is pretty telling, too. Magazines in pristine condition haven’t been browsed. They are too fragile a format for that. So, titles where no issues (or very, very few) have been circulated or used are given a closer look. Do we subscribe to that title in Flipster, the eMagazine product? Is the title available in any of the library’s research databases? How expensive is it? How unique is the subject matter? Does it help balance viewpoints in the collection, especially in political, religion, or other lifestyle-specific titles? The answers to those questions help me decide what titles get renewed and which get cancelled.

Next, we take advantage of EBSCO’s Corporate Sponsorship program. A nice representative goes to businesses in our town on our behalf and asks them to gift magazine subscriptions for our patrons. A funeral home, a pharmacy, and an orthodontic office currently offer about 8-10 titles each through this program. It is fantastic! The representative asks the companies if they want to renew when it is time and lets me know if any titles are no longer available through the program, and I can pick different titles when that happens. We literally do nothing but send a thank-you note to the companies that sponsor the magazines.

Third, we have a program called “Adopt-a-Magazine.” Individual patrons can adopt magazine titles and pay the subscription cost. We in turn place a sticker on those titles that say things like “A Gift of the Smith Family” or “In Honor of Joe Smith from the Smith Family” or whatever they want it to say. The titles are renewed through the big EBSCO list I mentioned above and the patron’s money covers the cost. We have probably 50-60 titles adopted at any given time. Some families adopt several titles. When it is time to renew, they get a letter asking if they would like to pay for the renewal (said much more eloquently than that, of course, but you get the idea!). Most do, but occasionally they opt out and the library either cancels the title or picks up the tab in our periodicals budget.

Fourth are direct orders. Titles we subscribe to that EBSCO does not carry have to be directly ordered from the publisher. They are mostly newspapers, but also some bulk titles (Michigan Gardener – we get 30 copies a month that our patrons can take and keep) and specific requests from librarians on staff (for example, Easy English News is a newspaper used in our English Language Learners Conversation Group.) I generally avoid direct orders since we have to manually renew them throughout the year and watch for the paperwork from the publisher.

Last, I mentioned our eMagazines product above. We use EBSCO’s Flipster product, and we love it! It is completely easy to use, and we rarely have to do any tech support with our patrons on it. It is mostly popular titles at this point: Newsweek, US Weekly, Cosmopolitan, Road and Track, Self, and the like. They are mostly duplicates of titles we also receive in print, although that is not always the case. I sometimes cancel titles in print and move it to the electronic version via Flipster if it gets better use there. There are some titles that rarely get used or checked out in print, but have a great usage rate in Flipster. I keep monthly statistics on usage, such as how many titles were accessed at all, which titles were accessed, and which titles got no use through the Flipster system. Again, those titles are renewed once a year and I make a few changes here and there as needed, based on the data gathered each month throughout the year.

I’m very lucky to have a Circulation Clerk who handles all the actual ordering, claiming of missed issues, invoices, etc. I mainly handle the selection end of things and she takes it from there. The Adopt-a-Magazine letters are managed by her as well. In other words, she is the brains of the operation and I get the fun part. All due credit goes to my Serials Angel in Circulation!

It can be a tricky collection, with changing titles, publishers, publication cycles, and titles constantly moving to “digital only” format or ceasing to publish altogether. They’re still pretty popular in our library, though, with an annual circulation of 6808 in 2017 (down from 7666 in 2016). For context, we are a single-branch library that serves about 30,000 people. Collections with similar use are Adult New BluRays at 6,386 in 2017, Teen Manga at 6,763 in 2017, and Video games at 6,341 in 2017.

How does your library handle serials? Are they still popular with your patrons? 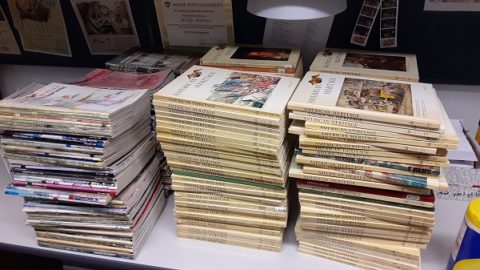