I think this is probably the billionth “drugs are bad” book posted. I think they are almost identical in format, message and I am willing to bet the same stupid photos. Actually I should call these books the Drugs and <fill in any condition> series.

We have Drugs and….

Every time I look at the pics in all of the books mentioned, I just want to cringe. Sometimes, they don’t make sense of the “story” or example, sometimes it looks like they are trying too hard. I think my teen self would have rolled my eyes at the teenagers presented. Some of the teens look to be in their early 40s.

END_OF_DOCUMENT_TOKEN_TO_BE_REPLACED 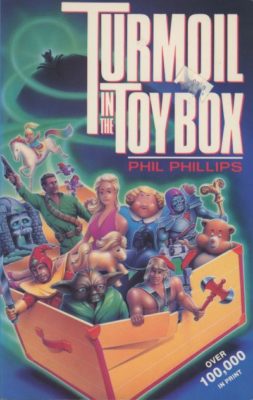 Turmoil in the Toybox
Phillips
1986

Did you know that Barbie, GI Joe, and Rainbow Brite are out to corrupt your children?

We have featured our guy Phil sharing his SHOCKING truth about Saturday cartoons that will corrupt and ruin your children. He also has a thing against dinosaurs. This stuff is the equivalent of Christian click bait. This time our guy Phil wants to talk about the cult influences of the toys. If you were a kid in the late 1970s and early 1980s, all of your favorite toys have been outed as evil influence by Mr. Phillips. Right now, you could be walking around with all this evil inside of you and NOT EVEN KNOW IT!

END_OF_DOCUMENT_TOKEN_TO_BE_REPLACED

Focus on Nicotine and Caffeine
Perry
1990

Submitter: It’s a little jarring to see nicotine and caffeine lumped together. Maybe nicotine has decreased in “everyday drug” status since 1990 or maybe I just don’t take caffeine seriously enough, but it seems like an odd pairing. And the “current” stats (from 1989) on smoking are obviously a little of out date by now—down from 29% to about 14% in 2019, per the CDC. The sentence “Like little smokestacks, smokers send out poisonous gasses into the world around them and deep into the world inside them” is pretty great though.

Holly: I think you’re right – smoking is just not as commonplace as it was when this book was published. Caffeine use, however, is still very prevalent. And I agree – we don’t generally lump those two drugs together. Maybe also because there’s no age-related law on purchasing caffeinated foods and beverages. Kids can buy a chocolate candy bar and a Coke; they can’t buy cigarettes.

END_OF_DOCUMENT_TOKEN_TO_BE_REPLACED

My inner snotty self wants to joke that you should save the drugs and smoking until after the kids are born, since that’s when you will really need it, especially during the teen years.

END_OF_DOCUMENT_TOKEN_TO_BE_REPLACED

The Drug Abuse Prevention Series is one that has popped up regularly. My gripe was mostly the poor (read: cheap) pictures that illustrated the books. Sometimes they were just odd, others seemed to have nothing to do with the topic. I think they looked dated even when they were fresh from the publisher. Take a look at some of these companion titles from this series:

Time to retire the series or at least get some newer material.

END_OF_DOCUMENT_TOKEN_TO_BE_REPLACED

Bombed Buzzed Smashed or Sober
A Book About Alcohol
Langone
1976

I could tell immediately from the font of the word “Bombed” that I had myself a lovely book from the 1970s. Almost every poster I had as a teen used that font. This is one of those teen nonfiction books used to write research papers. It’s okay. There are no pictures or anything interesting to break up the text. Newer books at least have a drunk teen on the cover.

END_OF_DOCUMENT_TOKEN_TO_BE_REPLACED

Submitter: I tend to browse the non-fiction of my local library and always seem to find something interesting. I did the self-checkout but I’m pretty sure when I return it and they are checking it back into the system they will be curious to know who the patron was. I guess that’s one of the perks of the job? I agree it probably has its place in a public library, I just didn’t expect my small town library to have this in their collection. I actually flipped through it […] and there are specific chapters for men and women. The [last] picture was submitted because of the dog-eared page. I’m guessing someone wanted to circle back to that section?

END_OF_DOCUMENT_TOKEN_TO_BE_REPLACED

Inexpensive Wine: A Guide to Best Buys Lee 1974 This little paperback can be found gracing the shelves of 62 libraries, according to WorldCat. I have no idea why. This copy has dog-eared corners, brittle paper, and yellowed edges. It