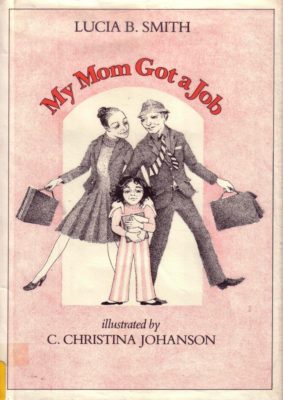 Mom got a job and now life is cruel. The basic story is that child laments how Mom used to do all these great things and now she doesn’t.  Dad’s role and responsibility in parenting is somewhat vague.

As you can see from the image below, the new job also implies that Mom is letting kid slide on housework .  Kind of a boring story and the illustration on the cover (I think the eyes mostly) are giving me the creeps.  Not really that awful, but certainly no award winner either.

I will admit to some personal bias on this topic as a well-meaning (idiotic) school employee told me that my part time library “career” was probably a contributing factor in my son’s less than stellar behavior during 8th grade. I will also point out that no one ever said things like that to my husband.  Said child also remarked to school officials that he was probably genetically pre-disposed to behavior problems since his parents were also troublemakers.

END_OF_DOCUMENT_TOKEN_TO_BE_REPLACED

How to Work for a Woman Boss, Even If You’d Rather Not
Bern
1987

The boss lady on the cover sure looks mean!  Sure, women as bosses were still something of a novelty in 1987.  In 2010 (I mean 2011!)  there are certainly discussions about women in business, women in positions of power, communication styles in the workplace, and all that.  This 1987 book is not going to address any current issues, so its time has come and gone.  I love the little blurb about how this topic has never been discussed openly or honestly “until now”.  Weeder!

END_OF_DOCUMENT_TOKEN_TO_BE_REPLACED

The No-Nonsense Landlord Building Wealth with Rental Properties Jorgensen 1988 I would have run and purchased this if I were a librarian back in 1988.  This really did have lots of good information for beginning in real estate.  Sample contracts,

END_OF_DOCUMENT_TOKEN_TO_BE_REPLACED

Workouts That Work for Women Who Work Pearlman 1988 Submitter: A special book for that weird fringe species, “Women who Work”!  Looking inside, I didn’t know that all the time I waste in the shower washing myself could be spent

END_OF_DOCUMENT_TOKEN_TO_BE_REPLACED

How to Start Your Own Secretarial Services Business at Home Kozlow 1980 Submitter: This book was found by an intrepid library assistant.  She gave it to the selector with a note stating “This is very, very old”.  Copyright is 1980,