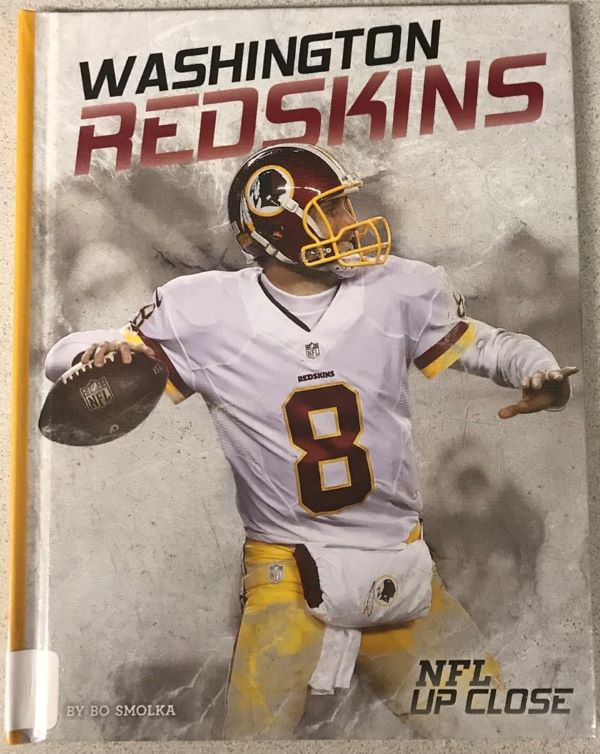 Since this is a bit more serious than just a discussion on a book, I am filing it under the Practical Librarian tab. This post is a bit longer than usual and illustrates one of the bigger philosophical aspects of collection development. I am only raising questions, and as usual, I am not telling anyone to weed or not weed a particular title. This is only my opinion and reflects some of the discussions I have had with my colleagues.

I was filing some books and this one jumped out at me. It is your basic football book outlining some key players and brief (very brief), sanitized, history of the franchise. Most public library collections probably have a similar set, with extra books on the hometown favorite. My library has a book on all the NFL franchises, but as we are in Metro Detroit, our sports choices will naturally favor Detroit area sports teams.

If you haven’t heard, the football team formerly known as the Redskins (cringe), put in a temporary placeholder name of the The Washington Football Team after years of pressure about the name. This is not a new controversy. The Washington franchise has been problematic for decades. This franchise fought tooth and nail against any attempts to integrate the team or address the problematic slur as the team name. (Washington was the last team in the NFL and only did so with some threats from the federal government.) This recent name change was also resisted until some big retailers said they wouldn’t carry Washington branded materials.

Overt racism is very much a part of the franchise history. In addition, the National Football League (NFL) has been in trouble over the years for a variety of issues: concussions, domestic violence, and sexual harassment, to name a few. The short answer is that the NFL and Washington, in particular, have a not so nice history.

Most of these franchise sports books aimed at children do seem to have a team history or “key moments.” It seems that some of the key moments in the history of Washington’s franchise are missing. There is no mention of the team name as a slur or their resistance to integration. Should the history of the team be so sanitized that it is misleading? How real does it need to be for the average 8 or 9 year-old reader?

I have also been thinking about the issues of racism in books that are ostensibly not about race (like football), but absolutely have a lot to do with racism. Can you have a book about the Washington football team and NOT mention these problems? How much should be discussed with children? How do we avoid “white washing” these issues, not just in football, but with the entire collection?

People are weird about sports traditions. I say that about my own high school which was called the Raiders and had an Indian head as a mascot much like the Cleveland Indians. Our high school was in a sports conference with Pekin, Illinois, where the mascot was a “chink.” I think it took an embarrassingly long time to change and there was some real resistance to changing the name.

I hope everyone thinks about these questions as we do our best to curate materials that not only follow our missions, but are truly inclusive and respectful. For the record, I would weed this book right now as the team name is different. If I am in the right mood, I would probably tell the publishers that I am now looking for a bit more unvarnished truth in all areas of the collection. 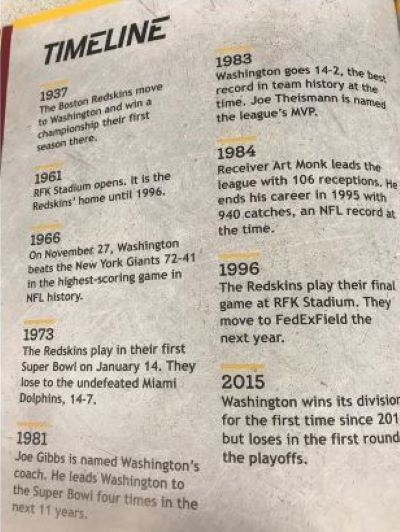