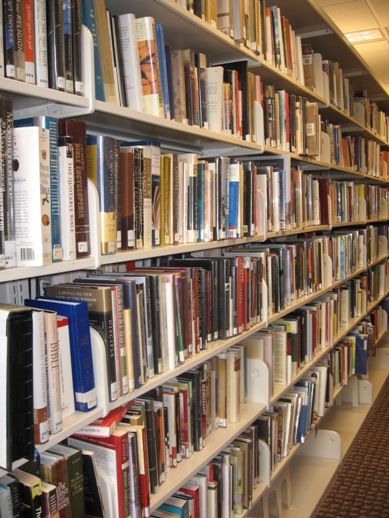 Before…books on the very top shelves and very little extra space on any shelf. 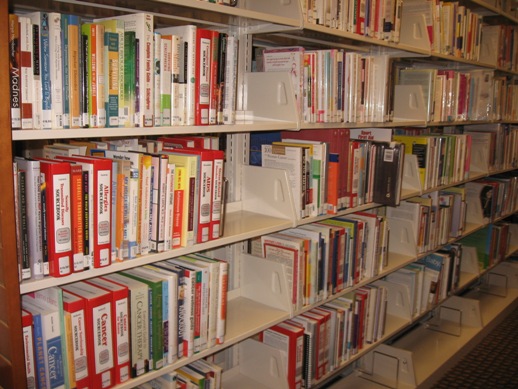 After…lots of extra space on every shelf, and no books on the very top shelves (which you can’t see here. There’s one more empty shelf above the top row of books in this picture.)
The goal of my shelf-balancing project (which just sounds fancier than “shifting,” but shifting is basically what we did) was to balance the available space between the collections. It wasn’t to equalize the space, but to create balance – a very important distinction. This project was focused solely on non-fiction, so the “collections” are the Dewey ranges from 000 to 900. I took into consideration the average size of the items in any given collection (art books are huge; poetry books are small), the average circulation of the items (some collections circulate more during the school year and less in the summer, and some just have a higher turnover rate), and how much space was actually available. We shifted the reference collection enough to add about half a row of shelves to the end of the non-fiction section. A lot of weeding has been done in the last year, and there were big pockets of space here and there throughout non-fiction. That space was needed in different areas, so we balanced it out.

I admit, I was nervous about the whole thing. Once you start shifting, it can snowball out of control. You can end up with an empty row at the end, when you thought you’d run out of space well before that. In that case, you have to start over and adjust your spacing as you go. That would have been really, really bad! The opposite could have also happened – you could run out of space much too soon and not get to shift the collections that need it most. It is a delicate endeavor that requires a lot of attention.

So, we started at the end of the 900s and shifted toward the 000s. At one point, there was a completely empty row. I had some confidence in my numbers, and that we’d fill it back up when we got a bit further in, but I was definitely nervous at times! 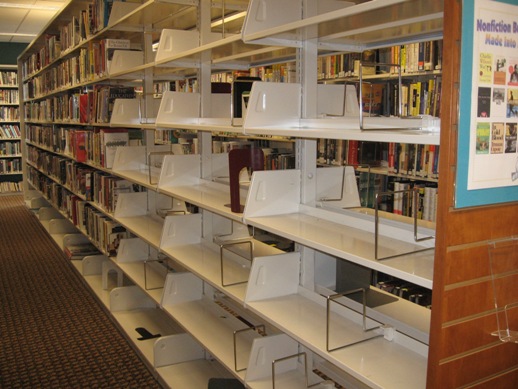 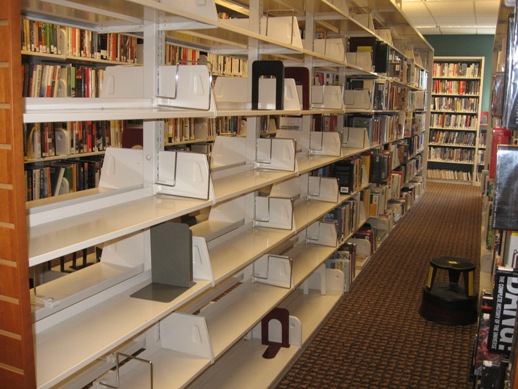 I honestly thought we’d run out of extra space around the 500s. That didn’t happen. We made it all the way to the beginning with just enough space to give a little breathing room to the computer books in the 000s. I would have liked to have more space left to give the computer books, but they did get a nudge.The formula I started with came from an article by Tony Greiner from the November/December 2005 issue of Public Libraries magazine called “Collection Development and Shelf Space: A Proposal for Nonfiction Collections.” The man is a genius and I would LOVE to meet him someday! (Anybody know him?) It was actually a combination of formulas that assigns shelf space by percentage of circulation. Basically, he says that the percentage of the total available shelving assigned to any collection should be equal to that collection’s percentage of the total circulation. If the 400s contribute to 2% of the total circulation, they should be assigned 2% of the total available shelving. You have to adjust for size, like in the 700s where the art books are oversized, but that’s the general premise. When I ran the numbers, it looked like the 000s should get 73 more shelves and the 300s should give up 32 shelves. Some of the numbers, like these, seemed a little extreme. I guess I couldn’t commit completely to Mr. Greiner’s philosophy. I added an “adjusted for practicality” column to my spreadsheet and went with adding 15 shelves to the 000s and only giving up 6 shelves from the 300s.

In addition to not quite committing 100% to Mr. Greiner’s philosophy, I was in a position not mentioned in his article: the shelf balancing part. I had those big pockets of space created by weeding that needed to be acknowledged. I didn’t want to penalize collections that had been weeded by giving away all the space created by those diligent librarians. They needed to be left some room to grow and replace some of what was removed. I also didn’t want to award the collections that were overfull from lack of weeding. They weren’t going to get extra space to accommodate their out-of-date books. Again, I wanted to balance the space. Luckily, there really weren’t any horribly neglected collections, so it wasn’t too much of an issue – but I did take it into consideration.

The good news is that every collection now has a comfortable amount of space.

The bad news is that a lot of different people contributed to the shifting, and some people had a different idea of what was “enough” space to leave on each shelf. Had one person done all of the shifting, it would have been more consistent. That was impossible, so we ended up with some inconsistency. I would have liked certain collections to get a bit more space than they ended up getting.

Back to the good news: every collection has a comfortable amount of space. I went back and counted how many shelves each Dewey range ended up occupying after the shift. My “adjusted for practicality” numbers are reasonably close to the final numbers! For example, I planned to assign 75 total shelves to the 500s and they ended up with 71. The 700s were assigned 160 and ended up with 158. The one that was the furthest off was the 900s, which I had assigned 250 and ended up with 227. Even the 000s ended up on 45 shelves, while I had hoped for 60. After shifting every single item starting at 999, I feel pretty good about giving the 000s five extra shelves, even if I had hoped for 15 extra. Especially since I thought we’d run out of extra shelves by the 500s.

I wish I had more scientific or logical reasoning to share for the “adjusted for practicality” column on the spreadsheet. It was a combination of having done a shift like this before, closely following circulation patterns and weeding habits of the librarians, and a good guess. It was totally worth doing and I’m happy with the results!